How to start a novel

After digging deep into the recesses of my mind and pouring out of ideas on a blank page or screen, what next?

The gestation period is not completely over. I continue to create characters and plot as I write. That continual creative experience is vital to the way I work.

For many writers, after this initial period of gestation and free writing comes the time to plan, to plot the novel in note-form, chapter by chapter. It seems a sensible strategy but it doesn’t work for me. It’s too soon for me to do that. I need to start writing immediately before any formalised planning takes place. I do plan in my mind, but if I do a detailed written plan at this stage I feel trapped and don’t want to write.

Instead, I skim through my notes and a couple of characters emerge. I put them in specific place just before “the inciting incident” as most creative writing tutors suggest. I sit at my computer in front of a blank screen (I prefer to type rather than write), ready to start the first chapter. I intend to “drip feed” the reader, letting her know enough to make her curious about the characters and about what is going to happen.

Here is the opening of my novel, After:

On a day when the sky was bluer than blue and the sun scorched everything it touched, two angels appeared on our doorstep.

I hope that the strangeness of “bluer than blue” and “scorched” and the appearance of the “angels” show that something unusual is about to happen. A little later we discover that the angels are illusions, mortal not heavenly beings; but the narrator’s perception of them as angels lingers. That teenage twins could be mistaken for angels is ironic in the light of what happens next.

Did I think all this out at the time – or am I analysing it with hindsight? Both. I do like to write a strong first chapter before any formal planning is done; but that doesn’t mean I won’t scrutinise it and re-write it later. What is important for me is to feel I have the right opening for the novel before I proceed. 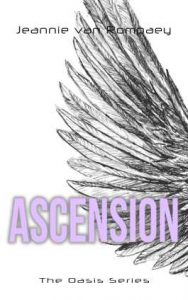 In my dystopia, Ascension, the first book in The Oasis Series, I have to introduce the concept of mutant humanoids living in enclosed communities in a future world. I begin with two characters, Odysseus, a one-eyed academic, and Isis, his three-armed assistant. The inciting incident, the proposed visit of a new CEO with a bent for sacking people, is indicated through dialogue. Here is the opening of the novel:

Isis bursts into the histo-lab, her three arms thrashing about like a crazed puppet on a string. ‘He’s at it again! Sacked half the workforce of Compound 33 today. Our turn next, for sure.’

I look up from the research I’m doing on art forms as political satire from Honoré Daumier to George Grosz. I must try to calm down my young assistant. She’s just returned from the compu-centre where rumour is rife and panic spreads like the plague.

I had a lot to present here: the difference between the characters, an indication of the confined world they live in and the tension generated by the fear of the expected visit. Note too the imagery of the plague, a hint of why they live in windowless compounds.

To start cold like this, I do have to make certain decisions first. Who is telling the story? Should it be a first, second or third person narrator? A first person narrator was my choice for the start of both these novels. But the tense of the verbs differs. In After, Sarah tells her story in the past tense, remembering the events that changed her life. InAscension, Odysseus uses the present tense. In his confined world the humanoids live in a present that promises little chance of change. The live from day to day.

Of course these writing decisions I make could change if I feel they don’t work, but the important thing is to begin and construct a first chapter I’m happy with. This gives me confidence to continue.

I would be interested to know if my openings intrigue you and make you want to read on. Please feel free to leave a comment!

Award-winning author, Jeannie van Rompaey, MA in Modern Literature, has enjoyed a varied career as; lecturer, theatre-director, actress and performance poet. As Jeannie Russell, she is a senior member of the Guild of Drama Adjudicators and adjudicates at drama festivals in Britain and Europe. Originally from London, she has lived in various countries including America and Spain. She has written eight novels as well as a number of short stories, two books of poetry.

The first two books in The Oasis Series; ASCENSION and EVOLUTION  have been re-published by Clink Street Publishing 1st March 2016 (RRP £8.99 paperback and RRP £2.99 ebook) and are available to purchase from online retailers including amazon.co.uk and to order from all good bookstores.

INTERVIEW about SUNSHINE SKYWAY, a novel by Jeannie van Rompaey