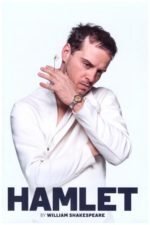 This production of Hamlet, directed by Robert Icke, was originally shown at The Almeida Theatre, Islington, and moved in to the West End to the Harold Pinter Theatre because of its popularity.

We saw it, sitting in the front row, in a £10 day-seat. In fact, the first couple of rows had been taken out to accommodate this production so there was no straining of necks and we could see the actors’ feet as well as their faces. Wonderful.

After all the hype, the production did not disappoint. Modern dress and setting encouraged us to believe that we were watching events in our own world. London, maybe not Denmark. The gauze that divided the set in two gave us glimpses of the wedding celebrations that followed hard after the death of Hamlet’s father – music, dancing, revelry, always with Gertrude and Claudius entwined in each other’s arms. Tantslizing, suggestive, a bit sleasy, easy to understand Hamlet’s distaste.

The first few scenes with the guards, showed us an intruder, who may or may not have been the ghost of Hamlet’s father, appearing on a screen, one of a series of multiple  monitors serviced by surveillance cameras.  This device worked well to introduce the ghost – quite creepy. No wonder the guards were terrified when they recognised the dead king. It’s either a ghost or a hoax. Once the ghost beckons Hamlet, he takes a more solid form. The device of the screens was used throughout the play to relay various scenes:  the play wiithin in the play  for example. After Hamlet’s death Fortinbras delivers his speech on a big screen as if on television, which was not only effective, but avoided the anti-climax of having Fortinbras appear on stage.

One of the things I liked best about this production was the way the actors made us listen to the words. The delivery of the lines was very natural, not over poetic, yet the rhythm of the lines was true to the beats in the text. The actors avoided over-projection but their diction was clear. There were no old-fashioned declamatory speeches. Hamlet’s admonitions to the players made sense therefore. You’re right, I thought, we don’t want inflated actor-speak and gestures. I have seen many productions of Hamlet and know the lines pretty well, but these lines appeared fresh, often giving new emphasis and meaning to the text. All the actors were working in the same style, at the same level, as a team.

Andrew Scott as Hamlet has been rightly praised for this role. We always knew what he was thinking, whether he was procrastinating, angry, agonizing or philosophising. It  ocurred to me, not for the first time, how difficult it must be to make those well-known lines your own. Scott did succeed in doing that, but not, I suspect, by over-thinking the vocal techniques needed as an old-time actor would have done, but by letting the words flow naturally. I wouldn’t be surprised if his native Irish dialect helped him achieve that naturalism. It also helped us empathize with him.

Verdict: Don’t miss this one either (see previous blog). Seats are sold out, as they are for Angels in America, but try for returns or day seats.

London Theatre Visit: Angels in Amercia, June 2017 Review of The Noise of Time by Julian Barnes

This website uses cookies to improve your experience while you navigate through the website. Out of these, the cookies that are categorized as necessary are stored on your browser as they are essential for the working of basic functionalities of the website. We also use third-party cookies that help us analyze and understand how you use this website. These cookies will be stored in your browser only with your consent. You also have the option to opt-out of these cookies. But opting out of some of these cookies may affect your browsing experience.
Necessary Always Enabled

Any cookies that may not be particularly necessary for the website to function and is used specifically to collect user personal data via analytics, ads, other embedded contents are termed as non-necessary cookies. It is mandatory to procure user consent prior to running these cookies on your website.